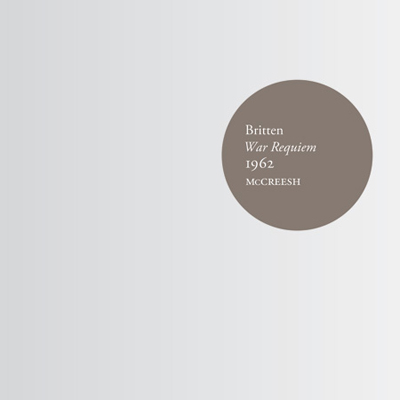 Trebles of the Choir of New College Oxford

Paul McCreesh once again assembled the massed forces of Gabrieli Consort & Players and Wrocław Philharmonic Choir to record one of the iconic masterpieces of the twentieth-century oratorio repertoire.

“…the McCreesh War Requiem, taped in the studio by combined British and Polish forces, has the presence and intensity of a live Cathedral performance: it sets new standards for this strangely moving choral work. McCreesh brings astonishing clarity to the work’s musical syntax … Here is a recording worthy of the Britten centenary.”Financial Times

“The latest in Paul McCreesh’s presentations of large-scale oratorios again uses the massed forces of the Gabrieli Consort & Players with the Wroclaw Philharmonic Choir – more than 300 performers in all. The result is another triumphant realisation of a complex, multi-layered work…”Independent

“McCreesh creates a vast crescendo and pauses for an awestruck moment before an incandescent Hosanna, with heart-stopping results. The Gabrielis and Wroclaw Philharmonic Choir are joined by young voices, and it shows in a choral sound of airy, pure brilliance. His New College choristers have the ideal mix of celestial glow and nimble impatience; his orchestra is wonderfully articulate. And the sound picture has the greatest depth and range of all the recordings … the profundity and coherence of McCreesh’s reading sets a new standard for this work.”BBC Music Magazine